No fees. Your donation is immediately deposited into the church bank account. 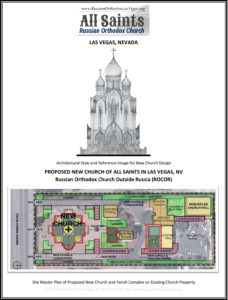 Thirty years a priest I managed to avoid the episcopate. When I left Belgrade in 1979, I knew that I wouldn’t be a Serbian bishop and when I left the Serbian Church in 1988, I thought this would avoid me the rest of my life. There is nothing better than being a parish priest, you know your people and you are a family. I even knew the names of the dogs in my homes.

I want to be honest there were times I was sure I’d be a bishop and a good one at that even being convinced by others that would be the case and thinking so personally. But I matured over the years and it wasn’t important or necessary the church didn’t need me I needed Her and would just continue doing what was before me. Missionary work is was what I loved.

By this time, I had organized three parishes from the ground up and all are still alive and doing well today. I was dean in two different deaneries and the chancellor of a diocese I helped to grow.

Now it was Lent 2001; a Wednesday and I was preparing for Presanctified that evening in the church when I got a call from the OCA Chancery. The Synod of Bishops was in session and Bishop Seraphim, the secretary of the synod said that I was elected Bishop of Baltimore, a vicar to the Metropolitan for Alaska and would I accept.

I recalled a conversation that last weekend in Billings, Montana when Father John Anderson of blessed memory asked if someone could turn down being a bishop.  Bishop Tikhon said yes of course unless he is a monastic then it is out of obedience that he accepts and so it was.

The consecration took place on Thomas Sunday in Dallas, Texas a month later. At the end of the liturgy the new hierarch is given the jezel and led to the center of the church where he blesses the four sides. There were so many cameras and flashes I thought this is what it would have been like during our Lord’s crucifixion. Little did I know what the episcopate would bring, it’s not all banquets and glorious services if you do it right.

From this time until my departure for Alaska it was a whirlwind visiting many parishes and being showcased as this new bishop.

Bishop of Baltimore was a title as is custom in the Orthodox Church vicar bishops get titles of major cities in the diocese of the ruling bishop and in my case the Metropolitan’s diocese. I visited Baltimore parish once for vespers and the best crab cakes I ever had. One connection I still hold dear is a Panaghia set that belonged to Archbishop Kiprian that was given to Metropolitan Theodosius when he became a bishop who gifted it to me after discussing this with the departed Archbishop’s family whom I met in Baltimore. I plan to wear them on October 11th.

The plan was for me to go to Alaska and put things in order and get Bishop Innocent on track to be the ruling bishop. Alaska is the diocese that gives the OCA credence as a church but neglected, deprived and depleted is the best way I could describe finding it.

I arrived in Anchorage on June 21, 2001, the longest day of the year. At midnight is was still light out I had to adjust to that and very long darkness in the winter. The people were great. At this point there was less than a hundred dollars in the accounts and I was not given any stipend from the OCA just expected to make it work and work it did.

Bishop Innocent was still living in Alaska and refused to meet with me. He actually wrote to a ROCOR hierarch and said he could bring the entire diocese with him. That was only talk as he wasn’t the ruling bishop. He died May 2002 in a hotel room in Anchorage and buried by a suspended priest in Pennsylvania. The damage he did lasted for years but he isn’t the only one responsible for damage in Alaska.

2002 Metropolitan Theodosius requested retirement as he was supposed to be very ill, he’s still alive today. The synod was split on the successor, two candidates Archbishop Herman and Bishop Seraphim. They needed a vote to break the tie and it was clear I didn’t support Seraphim so I was elected the ruling Bishop of Alaska and broke the tie. This changed the direction of my life. Neither was I returning to the Diocese of the West as its vicar or to Syosset as the vicar there to the Metropolitan.

I believe that once a bishop is elected to his see he stays there until the Good Lord calls him and that was my full intention but others had a different plan. This was important because no bishop ever did with the exception of two who died tragically.

During those years I was on the road half the time serving everywhere possible. The people knew the services and the priests all knew how to serve even hierarchicals; it was primitive in most places but I loved it and loved my people and had every intent and desire to make it what it should be. We had a seminary that was falling apart but the lifeline to prepare clergy to serve the diocese so that was a priority, too.

By my 5th anniversary of episcopacy, I started the memoirs and off and on for the next 15 years between bouts of depression and anger I wrote more until I finally resolved these issues and here, we are. The Serbs have a saying "never give in” and I didn’t then and won’t God being my strength.

Alaska started to fall apart after a few clergy whose passions drove them to attack their father led to my ouster. I requested a canonical court as bishops are protected by the canons to meet their accusers and instead of honoring the church’s way, I was summarily retired and sent off no means of support.

Bishop Irinej of Australia welcomed me even early on when the attacks started and so when I was homeless, I went to Australia and stayed there almost a year. It was then I first met Metropolitan Hilarion and asked to be received into ROCOR; it was decided for me to stay with the Serbs and I was fine with that until they sent me back to the OCA.

I was on my way to Serbia when I stopped in Las Vegas and here was diagnosed with Stage IV cancer and given two months or less to live. Honestly, I was looking forward to dying after the awful attacks the last two years but that wasn’t God’s plan. I had severe treatment for two and a half years and then another two years to recoup from that and get everything out of my system. I believe the pain and anguish from the assaults caused the cancer. I did go to Serbia where I had a lot of homeopathic treatment then returned to Las Vegas and because of my health insurance I stayed here. That’s enough let’s pick it up after October 11th?